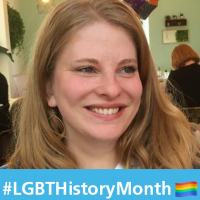 Molly Wysocki-Jones is Organisational Development support officer at NHS Resolution. Before she joined NHS Resolution in June 2020, she worked in a similar role for a hospice charity in Exeter, where she lives with her partner Natasha. In her spare time she and Natasha enjoy singing in a local LGBT choir, reading, as well as planning her 2023 wedding!

In this interview Molly talks about the importance of LGBTQ+ History Month to her personally and professionally.

Can you tell me about your role at NHSR?

The ED&I [equality, diversity and inclusion] strategy and action plan and health and wellbeing is a big part of my role. I’ve always been really interested in those sorts of things, so getting to do that as my day-to- day role is pretty exciting. I’m aware of the importance of intersectionality and I can bring my personal experiences from being part of the LGBTQ+ community to work. I feel comfortable with people knowing who I am and being open about my identity and I’m aware that I am lucky to be in that position – not everyone is. I understand my privilege in being ‘out’ at work and focus on how can we put out the support and resources out there for everyone, whether they are ‘out’ at work or ‘out’ to their families and friends, or not. Just making sure that that support is there and that’s for everything across ED&I. It’s a really enjoyable job, I love it. It’s been eight or nine months and feels like time has just flown by.

ED&I and LGBTQ+ inclusion is something I’m really keen to promote awareness of within healthcare because it’s a space  that can be particularly difficult for LGBTQ+ people. Working within healthcare in different sectors has allowed me to have that voice, which I know I’m lucky to have.

What does LGBTQ+ History Month mean for you?

I was having a think about this this morning, because when you look at the dates, it’s amazing how recent everything is. LGBTQ+ History Month in the UK started in 2005 and it came about on the anniversary of when Section 28 was abolished, which had put legal limits on talking and teaching about LGBTQ+ experiences in school. It’s amazing to think about that as I’m only 25, and so when I was in school, it was actually illegal to have those conversations.

I definitely didn’t experience LGBTQ+ awareness and education in school, even when I was at the top end of secondary school, it was never really spoken about.

I think there’s been a lot of progression in the last few years. It’s been 7 or 8 years since I’ve left school and awareness is definitely growing and hopefully will be talked about more in years to come.

So I think that’s why the month is really important to me, because it specifically looks at education within school. That’s something I didn’t have and just having those open conversations at an earlier age would have been life-changing for me, LGBTQ+ History month is also a good reminder for some people of how recent these changes are. For example it’s 50 years since the first Pride March in the UK, and I think that’s amazing, it’s been 50 years, but it’s only been 50 years and there’s much still to do so it’s a big month for me definitely, both personally and professionally.

At school, how did that make you feel?

I think the lack of awareness and understanding is probably something I didn’t really notice at the time, but as I’ve got older and I’ve become more comfortable with my identity and talking openly about it. I realised that something was missing. I think if I had been in school now and those conversations were happening, I probably would have had those realisations earlier, and been more comfortable in myself earlier. It also spreads out into culture and society – all the conversations and representation that are happening now, although it’s still limited in some way. For example, the BBC drama Gentleman Jack is about to release it’s second series and if I had seen that type of representation on prime time TV when I was 13 or 14 it could have made a world of difference. But things like that just didn’t exist at the time. So yes, there has definitely been an increase in representation, in school and outside of it, that I think will make a huge difference for a lot of people.

What is NHS Resolution doing to encourage inclusivity?

There’s a lot happening about having open conversations, and encouraging and building  positive relationships with colleagues. It’s very much up to the individual if they want to disclose anything, there’s no requirement to disclose anything. But we’re focusing on putting support in place so that if staff do make those disclosures, they feel supported both as an individual and as a part of the wider organisation.

We’re looking at the support we give to line managers in terms of how they can support their colleagues, but also vice versa, to line managers themselves who may be the ones who are needing that support. The current focus is on awareness sessions about having these open conversations. There’s a lunch and learn session that we’re running later on in the month looking at LGBTQ+ History Month. Within that we will also be having some initial discussions about a staff network for LGBTQ+ employees, but also for allies as well because we’re very keen to encourage open conversations and education across the organisation. With that network we would be looking to work really closely with the other networks we have, the Diversity Matters and Disability Networks and we are really excited for these conversations with staff about the possibility of a new LGBTQ+ Network.

What’s your advice for staff?

Something I’ve always been really passionate about is the language that surrounds LGBTQ+ people. I think people have a fear of getting things wrong but actually sometimes acknowledging something or someone and their experiences is incredibly valuable, not just for the LGBTQ+ community. Even if you might say the wrong thing, you can learn from that and you can educate yourself on that experience and then share that learning with others. So I would always say to not make assumptions and don’t be afraid to have the conversations, because actually I’d much rather someone talked to me about  my experiences within the LGBTQ+ community than just ignore that part of my identity and pretend it’s not there. There’s always a way to learn from it – if you do make a mistake we’re all human, and the acknowledgement and awareness from having those conversations can make a huge impact.

What is your message to people thinking of applying to work here?

As an organisation we’re very much focusing on making it a safe space for people, so whether that is as an LGBTQ+ person or someone who has got a family member who’s recently come out to them, or someone who just wants to know a bit more. We want to recognise the power of diversity and the value that everyone brings to the organisation, both as an individual in their own right but also in the wider contributions that they make.

During office hours, all media enquiries should be directed to the press office. Office hours are Monday to Friday, 9am to 5pm.

Sign up to be alerted by email with new press releases